He's not quite done yet, just got his base to sort out and to paint the banner the goes across his chest. I'm going to have a chaos marine that is missing about 90% of his torso and his right arm from where he tried to stand up to Smashy Senior but just got a powerfist to the face instead. In fact it's this chaos marine right here.

The Grand Alliance of Humanity

The first faction for Void Assault to get rules.


The was formed in 2351 as a way to unite the human colonies scattered around the galaxy. Initially this was a good thing, all the planets prospered from it, but eventually the Alliance Council and the inner worlds got greedy. They increased taxes on the poorer outer worlds, began using slave labor camps and calling them "temporary oportunity centers" and eventually began making people who disagreed with them vanish. This eventually split the galaxy into a civil war between the Grand Alliance and the Republic of the Galactic Fringe.

ships are usually well equipped with well trained crews. They favour a streamlined shaped hull and are highly offensive in combat thanks to having many powerful weapons. The most notorious of their weapons is the Magna-Cannon. Only a single ship currently has access to it but threat of unleashing it is enough to send whole fleets scattering.

People hate Spawn. They're seen as a mindless blob that wanders around slowly and gets ignored because of it. People who believe this haven't fought against Spawn recently.

I run them simply. A unit of 5 with Mark of Nurgle for a reasonable 180 points. They then run up the board and eat something. Thanks to their god awful rules in the previous codex they're a highly neglected unit. They used to wander towards something slowly and flop over dead half way there. Now they move 12" and charge 2D6 (re-rolling for fleet) and couldn't care less about terrain in the way if they tried. Thanks to Nurgle they are now T6 and with 3 wounds each are a pain in the backside to take out. Sure they don't have any saves but boltguns are wounding them on 6's. On the charge (and they will get the charge if you know what you're doing) they are getting between 3 and 8 attacks each. That's 15 to 40 attacks for the whole unit at S5 with the potential for poisoned as well.

I admit they can be a bit hit and miss but you're playing chaos marines expect some random stuff to happen. These guys can be annoying for anyone who doesn't know what they do. I've seen Ahriman cast Invisibility on them and they then proceeded to take out Abaddon on their own (that was some lucky rolling though).

Definitely one of my favorite units, I use Vampire Counts Dire Wolves for the models because they look more nurgley (is that even a word?) than the standard ones and you get 10 for £15.50 instead of 2 for £25.
Posted by Daniel Ryan at 20:51 No comments:

Just a quick update on how Void Assault is going. So far so good. The main rules have been written out and I'm now on to creating the initial ships for each faction (of which there are 5!) rules wise. I should have enough done to begin play testing with proxy models soon. Getting the points right is a bit weird without testing it first though because you don't know exactly how powerful stuff will be until you see it in action.

I'll post the basic faction backgrounds soon, it's not much but it gives you a rough idea on what the factions play like and what their ships should look like.
Posted by Daniel Ryan at 22:00 No comments:

No pics I'm afraid but there is a quick run down of what happened.

This was close right up to the end. We'd get a turn of almost nothing happening then whole sections would fall apart. If there was 1 more game turn I might have pulled it around. We got Crusade (4 objectives) and short table edges again. My artillery had very little to do but I manage to get the Psychic Communion trick off which only cost me 2/3 of a guardsman squad but at the bonus of knocking out a helldrake and night scythe before they could cause any damage. In the end though a guardsman failed a 2+ cover save which left one of my objectives open and I failed to stop some plague marines gaining line breaker which cost me the game. Another turn though and I would have taken out one of his objectives (3 cultists VS an unharmed stormraven) and and got line breaker with smashy and company.

Yet again Crusade (5 objectives) and short edges. 5 big daemons flying around (keeper of secrets, bloodthirster and 3 princes if I remember correctly) with a portal glyph and 2 units of pink horrors. He killed all of my troops quickly but I managed to do the same back. I got first blood from the portal glyph (scattered in front of a duel-melta landspeeder). Hats of to Chapter Master Smashy though, lasted 4 rounds of combat against 3 princes and the keeper before finally falling. He would have taken 2 of the princes out as well but he kept using Heroic Intervention to switch who Smashy was fighting. Had an emergency with the Manticore too, turn 1 the warpstorm table destroyed the storm eagle launcher (4 rockets all count as 1 weapon) but luckily my Techmarine was next to it and fixed it up on a 2+ (iron hands + 2 servitors). Came out as a draw because no troops so no objectives held, he'd got warlord and linebreaker i'd got warlord and first blood. Once again though a great game but I simply couldn't deal with so many MC's in my face right away.

Thankfully that's the 2 games I was worried about out of the way, those were the guys who knew what they were doing more than the rest. From here on out it's mainly down to scenario and deployment as to who will win.
Posted by Daniel Ryan at 22:50 No comments:

This will be a little series similar to my Clan Tactica series but going over general units in my armies that I like but the internet seems to hate. First up is my personal favourite unit, the Deathstrike Missile Launcher.

The Internet's Opinion: It's crap take a Manticore for the same points with more reliability.
My Opinion: MASSIVE ROCKET!!!!!

Sorry it's late, only just thought to post about it. On Saturday I had my first league game against a Tau gunline list that featured lots of pathfinders (3x units of 6 guys, a bit overkill) plenty of firewarriors and 2 units of missile broadsides with as many missile drones as he could fit in with commander helpful to boost a broadside unit. At first it was a bit "whoah, that's a lot of rockets!" but then we got mission 1 (3 objectives) and short edge deployment which was perfect for me. Thanks to my artillery with stupid range and lots of blasts I sat back and just blasted away. End of my turn 3 and all he had left was 4 firewarriors and 2 pathfinders with something plasma battlesuits stuck in reserve and I had only lost a couple of guardsmen and some scouts so he called it. I'll try and write up a battle report for the next one or at least get some pictures taken.
Posted by Daniel Ryan at 19:47 No comments:

Back to Iron Hands for today I think with some pretty badass models. The Legion Contemptor and Legion Squad.

Void Assault: Some of the Mechanics.

So with the main rules mostly done for Void Assault I thought I'd share some of the games mechanics that I believe set it apart from other games. Once it's done I'm going to ask a few people to look over it for thoughts and try to get a play testing session in with some proxy ships.

And so, it begins... UPDATED

In my previous post I mentioned that I am going to be creating my own space combat miniatures game. Work has begun on what is currently known as Void Assault (not a very good name, I'm open to alternate suggestions though). The V0.1 rules set is coming along smoothly and I have a couple of renders from my first ship. It's the same one as in the previous post but now it has some more details (windows and landing gear). Since creating those renders there is also a shuttle bay door been added to the dorsal (top) section of the ship and some general vertex cleaning done. Unfortunately though the renders are not particularly good (IE didn't show off the detail properly) so I shall re-render them with the new stuff in later.

They will be added in to this post so look out for UPDATE added to the title.

Seriously though, should I keep Void Assault or change it to something else and if so then what? 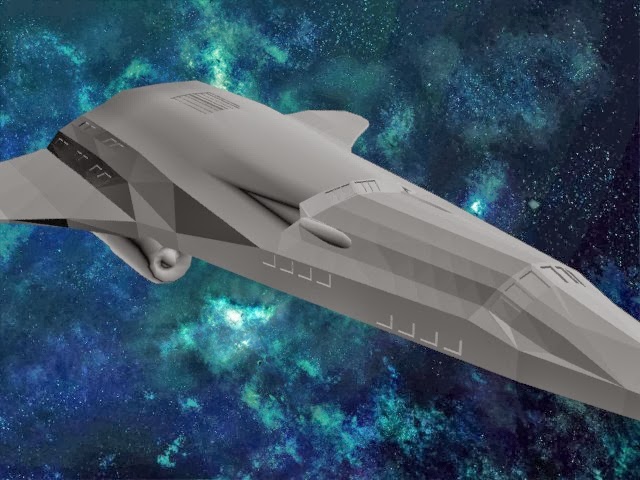 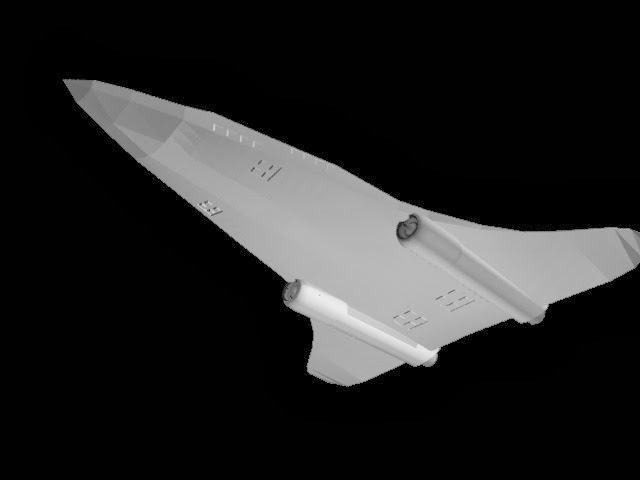 I don't know why. I haven't a clue why. All I know is that this is something I want to do, that I am going to do.
Read more »
Posted by Daniel Ryan at 00:10 No comments:

Traditionally I like to make lists that are themed and semi-competitive. For a local upcoming league I've decided to do things a bit differently. This time though I've decided to take units that I like to use. This has lead to an unusual looking list even for me.