Starter Sets: Where to go next?

So, you've brought a starter force. You've played a few games with them and now want to expand. But where do you go?

In the end it's up to you, but the most obvious choice isn't necessarily the best. You might want some big tanks to add more firepower to your army, but is that really going to help? Same with adding more AA units.

What I recommend is to first get your command vehicle, you're going to need one soon anyway so you might as well get it now. This also means your commander is in a proper vehicle with his max sphere of influence.

Next step isn't to get more tanks either. It's to get more infantry. In the several games I've played the lack of boots on the ground has meant claiming objectives can get difficult. This is why I have got some more infantry in Raven light drop ships on the way to grab objectives quicker and give me more objective holders.

Play a couple more games and see what your list is lacking, then get some units to compensate. I've got some Wolverine scout units for additional AA and to help with the Kodiak command vehicles orbital strike as well as some Gladius heavy tanks for additional firepower arriving soon. I'll post those probably on saturday when i should be getting them.
Posted by Daniel Ryan at 12:51 No comments:

I've actually made some progess!

I wasn't expecting this. Somehow over night I've managed to paint the rest of my starter box and base them. Managed to widen the hole of the flying stand enough to get the peg in a bit and stuff it with superglue. 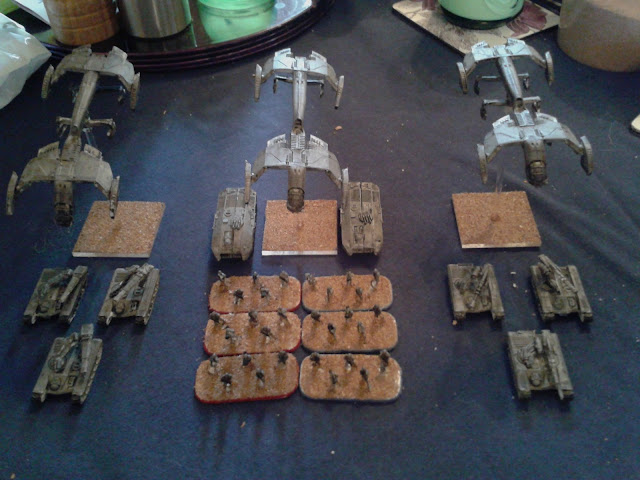 Both Condor's are painted and the infantry done with squad markings on the base (red and blue). Decided on that sort of grass for the base because my uncle gave me a tub full and it makes the models stand out.

TIP: When painting infantry don't go into detail. It's not worth it. They're too small for it to be appreciated. All I've done is infantry in grey, guns in black and wash. That's it.
Posted by Daniel Ryan at 10:39 No comments:

So here it is, my first post. This is the current state of my army. As you can see it's a semi-painted starter box. I've got some more stuff on order and i'll post those when they're done. The far left Condor isn't on it's flying base because it wont stay in the hole (seriously it's been happening since Salute, has anyone got ANY tips for this?) 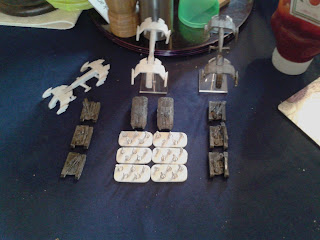 Despite only having played starter games so far (mission 1 in the book and no more than the starter forces with only 5 buildings) it's quickly become my favorite game. Even with our currently limited resources the game frequently can go either way, especially with those damned Scourge blowing up every building they find. Anyway more to come later, probably when i finish painting what i have so far. Maybe a battle report on saturday as well, haven't decided on that one yet.
Posted by Daniel Ryan at 15:44 No comments:

Hey Guys, i'll be starting this page up properly soon with where my army is at the moment and possibly a bat rep on saturday.
Posted by Daniel Ryan at 13:10 No comments: