Why the Internet is Wrong

The internet, especially for us gamers, is a very vocal place filled with keyboard warriors and think-they-know-it-alls. It is also extremely negative. So many times i have seen people moan that "unit/codex X is worthless" when they've seen what one person on the internet said about one experience. The Internet is wrong.

Lets take Chaos Space Marines for example. I have seen many times people say the only good things in the book are cultists (because they're dirt cheap) and helldrakes (because they're helldrakes). They've also said Daemon Prince is worthless now he's not an eternal warrior.

I play pure Nurgle to the extent that if it can't take MoN it doesn't go in. That means i have not used a helldrake. Ever. Chaos Space Marines are currently my second best army (out of 4) loosing only to Necrons and even then not by a lot. I also field Gary (my Daemon Prince) and a unit of Spawn. According to the Internet that is they are some of the worst possible units to take in the book, yet they are some of my top units. It all comes down to how you use them and whether you can get past the negatives. Gary flies up the board with a 3+ cover save turn 1 then smacks the ever living snot out of what ever squad he finds. Spawn are incredibly fast and couldn't care less about that terrain in their way, they can also (potentially) put out an ungodly number of attacks and nurgle makes them T6. OK no save but you've got to wound them first and they're only 180 points for 5 beasts with T6 and 3 wounds each. Plague Marines. 1 point more than in the old codex. Internet's response "OH NO THEY'VE GONE UP THEY'RE WAAAAAAAYYY OVER COSTED NOW". my response "poisoned CCW's for 1 point, FANTASTIC".

I would move on to Dark Angels next but The Watcher (yes i've found you, and The Artisan too) has already done one on them - Link
Posted by Daniel Ryan at 13:09 No comments:

I have just checked my top traffic sources and there are sites such as zombiestat and vampirestat on there. If there is some way you guys can see these (and i doubt there is) DO NOT CLICK ON THEM. From the research i've done they redirect you to other sites so they get more ad revenue and give you viruses. The blog should be fine so long as i don't click on them (which i haven't). There is currently no way to block or stop them.

Just wanted to give you real guys the heads up just in case.
Posted by Daniel Ryan at 19:53 No comments:

Today i actually got to play against the new marines book. 1k points my necrons vs his "imperial fists" (some kid, roughly 8, using some proxies and half unpainted plastic grey/half ultramarine colours). Although i won 5-1 he didn't make it easy.

What i learnt was that marines are cheap now. Because of this i was facing lots of tacticals, some sternguard, an ironclad and a vindicator with a libby who drew puppet master and psychic shriek for good measure. I was outnumbered by marines at 1k with my necrons, that's never happened before and it was scary.

Bolter Drill is powerful. might not sound like a lot but if you have a lot of bolters you will be re-rolling a lot of 1's.

FUCKING VINDICATORS!!!!! (don't give a crap what the internet says gauss is NOT an instant win for necrons against vehicles, never has been and never will be)

Deathmarks may start on the board but turn 2 they'll be rolling to come in from reserve (last 3 games they've mishapped from the veil on turn 1 and gone into reserve).

Flyers aren't as good as they sound (kill 1 marine then arc onto my own warriors killing 2. GG necron pilot).

Overall i was impressed, if someone with more experience had used that list they could have tabled me. I had 1 objective, First Blood and Slay the Warlord, he had Warlord and there was 1 objective i was only just contesting. Another turn and i would have lost, not doubt about that. Makes me want to start my Iron Hands sooner!
Posted by Daniel Ryan at 00:29 No comments:

The Flesh is Weak

In my last post i mentioned about starting Iron Hands. The reason for this is simple. I like Drop Pods. I like Dreadnoughts. Despite the grumblings of the internet they work in 6th ed (oh but hull points nerfed them majorly! Bullshit, try telling that to one of my Ironclads!) and giving them It Will Not Die just makes them better than ever (and IWND drop pods is simply funny).

My plan for the army is fairly simple. A few Tactical Squads provide the bulk of the army, with some Devastator Centurions providing back up (they're so much nicer in person than the pics) and an Assault Marine unit for rapid response around my main force. Then i start raining dreadnoughts around the enemy, with a tooled up chapter master and some Sternguard/more Tacticals in another pod to land later for additional support. Maybe throw in a whirlwind with a near by master of the forge in larger points games (more dreadnoughts = more fun).

As i go about creating this army i'll post updates on here. I currently have a converted Chaplain (one of my favourite models from my previous marine force, couldn't let him go) and a pair of drop pods. Hopefully i'll be getting the strike force soon (such a good box, you save about £50 and get a reasonable 1k list) and that'll really boost me up to the sort of thing i'm after.
Posted by Daniel Ryan at 18:49 No comments:

This year i entered armies on parade. Considering i threw the thing together in a week it didn't come out too bad however i only came 3rd (agree with who came first but second place had nothing almost nothing on it).

There it is. The story behind it is that the chaos and guard were allies to defeat the necrons, now the necrons are all dead they've turned on each other. This allowed me to get the guard in as an allied detachment to show off the battle without having to glue them down as you would have before 6th edition.

The board you can kinda see to the left is a 1k nid army, built and painted in a week on a board that was sprayed black and then sprayed white. That was it and it came second. Top left board "Regicide" was a chess board using the Dark Vengeance against Assault on Black Reach with a few extra models thrown in (assault marines as knights, chaplains as bishops etc) and i agree that should have won overall.

I'll reuse the board next year but re paint the building so it matches the defense line and probably use my up coming Iron Hands instead. More on the marines later though.
Posted by Daniel Ryan at 22:50 1 comment:

I've been doing my rounds of the forums again, and i'm getting sick of it. GW bashing.

As usual it's one small thing that's been blown out of proportion and people are going through the motions of "how dare they do this!", "i'm never buying from them again!" and "this is just sickening!". Really? Sickening? Some of you guys need to stop focusing on the negatives so much.

Don't get me wrong, i think GW do charge high prices and there are alternatives out there that are just as good as the warhammers for less. But bitching and moaning on the internet wont help anything. every other forum topic these days somehow reverts to being completely anti-GW. I saw one where someone asked for advice about a DA list, which changed from being helpful to how crap the DA are (which is complete bull) and then changed into another GW hate thread, now that poor guy who just wanted some help is now being spammed by "screw GW" repeatedly.

This hobby, like any other, is about having fun. Like GW, hate GW. I couldn't care less, but stop turning good topics bad and focusing ONLY on the negatives. Yes there are negatives, all companies have something bad you can moan at, but there are positives as well.

Today i decided to make a C'tan, but i don't like the Deceiver or the Nightbringer and i'm not paying £95 for the transendant one. So what i did was take the tomb spyder i've had for ages but not built and get some wraiths and do some kit bashing! This is the result: 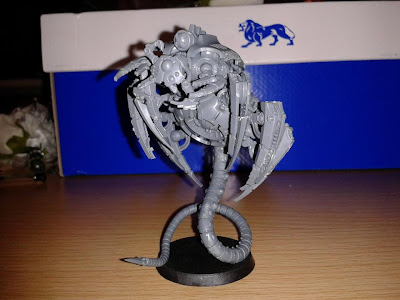 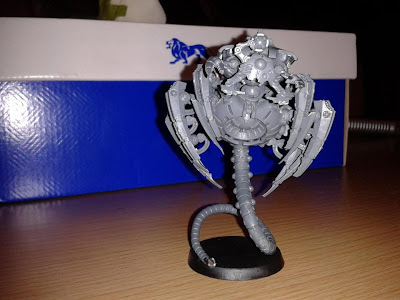 Looks like a buff wraith, and i'm fine with that. I have a unique C'tan and some cool spares to go on my Armies on Parade board. Now all i have to do it paint him up.
Posted by Daniel Ryan at 21:51 No comments:

Today i just wanted to speak about battlefleet gothic, possibly the best game GW have made. Unfortunately being labelled as a "specialist game" meant it wasn't too popular and is now out of production, but the rules are still free from the GW website so get them while you can.

I played my first game in ages the other day, just a cruiser clash with us each having 1 Strike Cruiser, 1 Mars Battlecruiser with a lvl 1 admiral and a Lunar class Cruiser too. This meant we could cover pretty much everything including the dreaded nova cannon (damn that thing is powerful!).

My opponent had to go about half way through at which point his strike cruiser was destroyed and i'd taken little damage. Another player stepped in and preceded to table me, getting a double kill with 1 ship (nova cannon scores a direct hit killing 1, lances knock out the other). I almost take out his flagship but my Strike Cruiser was no match for a Mars and a Lunar focusing on it.

It was a fun game and has gotten me back into BFG (not at a good time for the game though). I'm now planning on converting a Tyranid fleet (gorgoyles would make decent cruisers with a slight bit of work) and an Ork one (or at least an Ork Space Hulk) so i can play larger games and maybe get some pics or a battle report up on here one day soon.
Posted by Daniel Ryan at 14:09 No comments: