I've done a couple of battle reports! They're linked over at the side if you want to check them out. I'll hopefully be doing a few of these and i'll make sure to put up a post when new ones come out.
Posted by Daniel Ryan at 19:06 No comments: 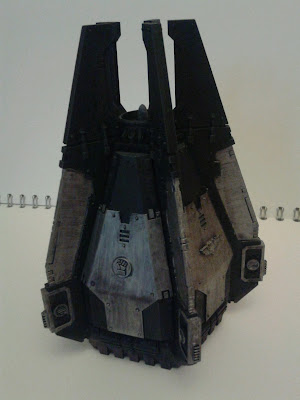 Today i've been painting up my second drop pod. Much better than the first one. I've decided Dreadnoughts and HQ's get the scheme of the first pod, everyone else gets the scheme of my new one. Oh and yes, yes that is the Imperial/Crimson Fists logo on the new pod. It's the closest to the Iron Hands one that comes in the kit. 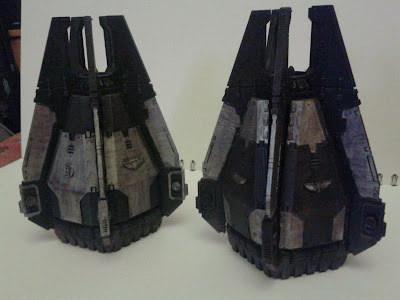 Speaking of chapter logos, i tried some free handing today. Did not go well at all. The brush i used had a decent tip but i think a fine detail brush would have been much better. I think i should also try it on something bigger first, such as a banner, so i get a used to it and work my way down to shoulder pads.
Posted by Daniel Ryan at 23:04 No comments: 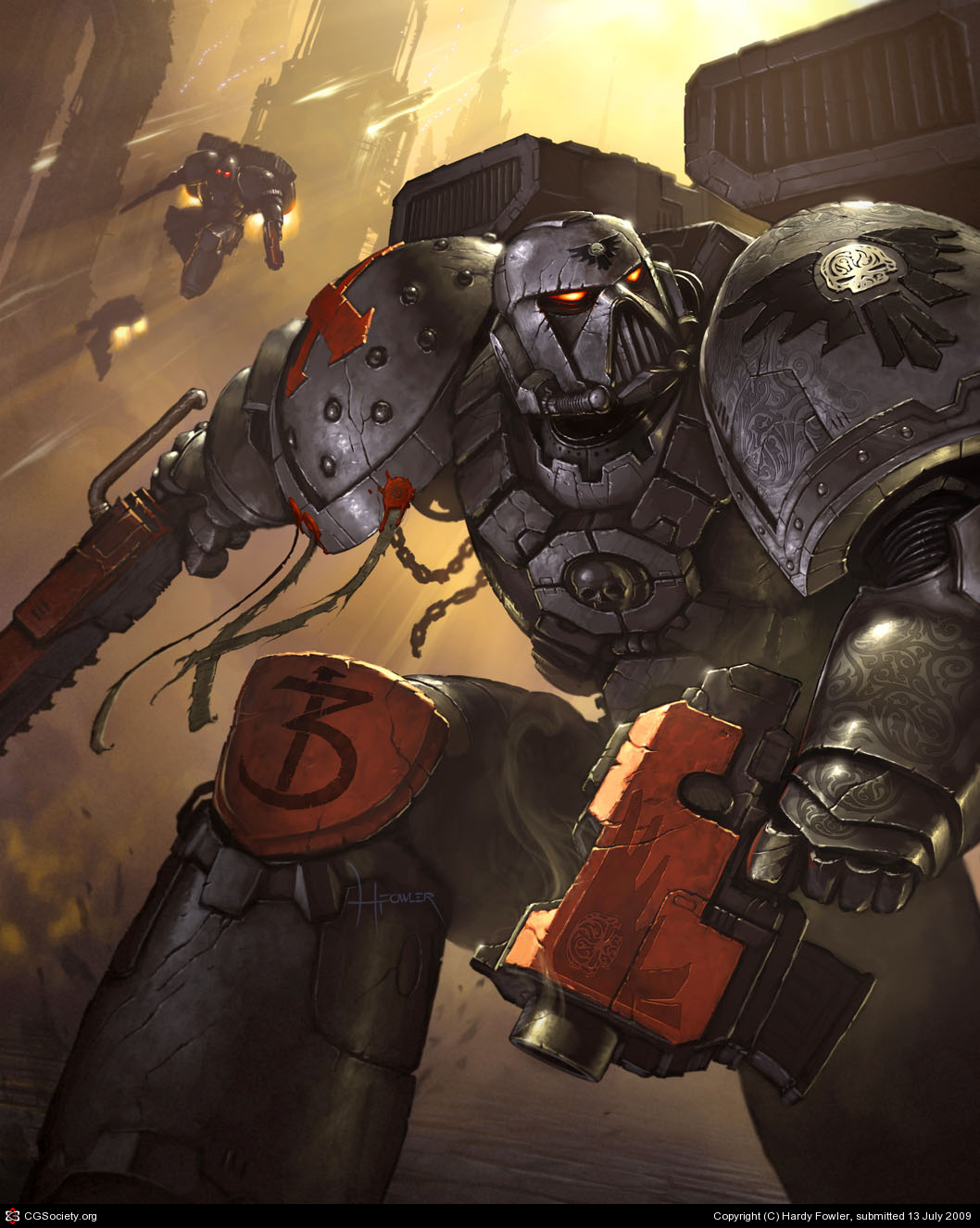 So i was talking to someone the other day and mentioned some plans for my Iron Hands. One of those plans was to include an Honour Guard for my Chapter Master for a tough assault unit that can handle being on it's own if needed. "Why not use Vanguard instead, they're cheaper?" was his response. I've seen responses to things like this before. At base cost, yes Vanguard are cheaper, but that's base cost only.

A single Vanguard with a power weapon is 34 points.
A single Honour Guard is 25 points base.

What difference do those 9 points make? What makes Vanguard so much better?
Well firstly the Vets take up an elites slot. Not really a positive as i want dreadnoughts in these, maybe some Assault Centurions.
Cheap jump packs? Not handy at all as they'll be in a drop pod or stormraven anyway.
Heroic Intervention? Can't see it ever getting used.

Lets try this from the other side. What makes Honour Guard so much better?
For 9 LESS points you get the same stat line (with +1 LD), a power weapon, a bolt pistol, a boltgun, doens't take up a force org slot and everyone has artificer armour. This gives them better shooting, better armour and the same combat punch for 9 points less per model. Oh and the chapter champ who ensures my Chapter Master batters as many people in combat as possible. That's not even counting the 25 point Chapter Banner that does not replace any wargear and gives the unit +1 attack and nearby marines a re-roll on morale and pinning tests (champ has 6 attacks on the charge with that!!).

Are Vanguard really that much better? Apparently not.
Posted by Daniel Ryan at 23:18 1 comment:

Getting Ahead of the Game: ToMG Part 2 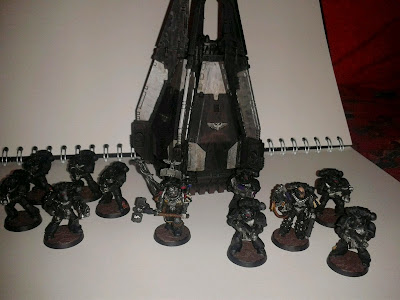 This is the second hand in for ToMG completed. This time i've added a drop pod (which i now know what i'm doing, not doing the others like that!) and another combat squad. 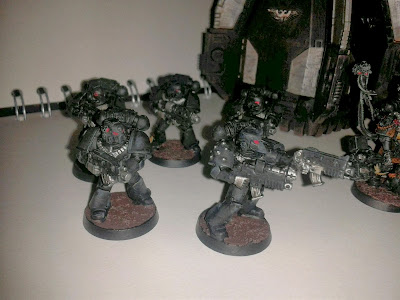 Here is the second Combat Squad. Grav Gun and Combi-Grav. Yet again the sarge has a combi-weapon and a boltgun. It'll be a recurring theme in the army. The others should also have a white stripe along the vent on top of the helmet like normal Iron Hands sergeants seem to have. 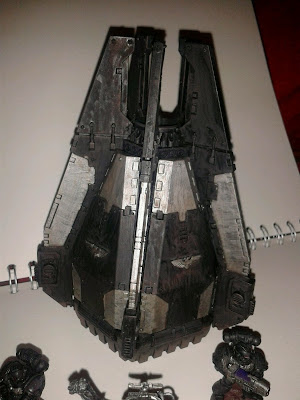 With the pod i painted the metalic bits silver and drybrushed Tin Bitz on it to try and get a bit a damage on the way in. That didn't quite work. Next time i'll stick to doing the same thing i did with the normal troops. The annoying part though is the models look worse with the flash but you can't see them properly without it.
Posted by Daniel Ryan at 15:30 4 comments:

As requested here is a picture of a funny looking space ship. 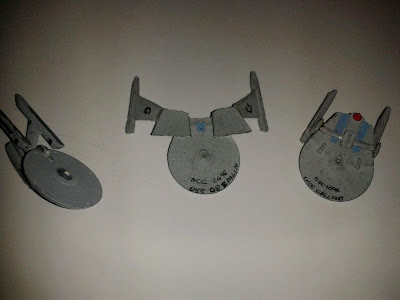 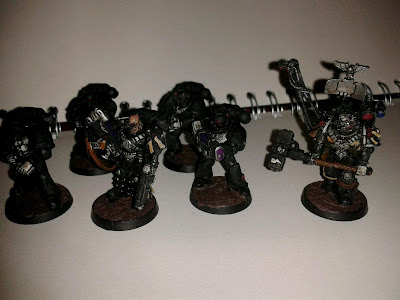 This is my first hand in for Tale of Many Gamers. My Chapter Master and a Combat Squad with Plasma Gun and Combi-Plasma. 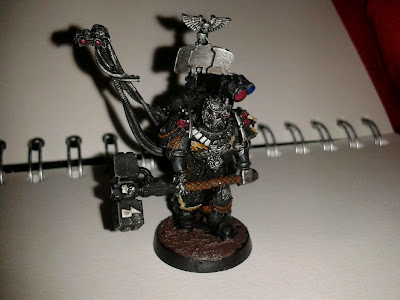 The Chapter Master i've shown before, but now he's 100% done. In games he has Artificer Armour, Shield Eternal (the backpack generates a personal force field that has the same effect to satisfy WYSIWYG), Thunder Hammer and Digital Weapons for a meaty 240 points. That may seem like a lot but this guy will be one tough son of a bitch to try and get warlord from. 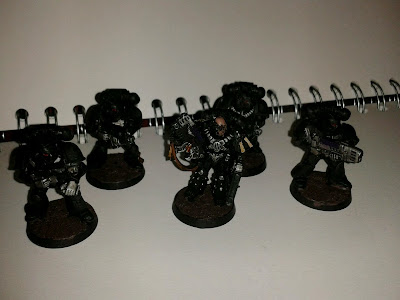 This is my first Combat Squad. The reason the sarge has a boltgun and combi-plasma is simple. The pistol wont be used. He's coming down in a drop pod so if he ends up in combat it's because he's been charged. A chainsword would be worse than the pistol as at least i could charge after firing the pistol. He's having a combi-weapon as that effectively doubles the firepower of my special weapons on the turn they land. Rule of Cool then kicks in which states duel wielding a pair of 2 handed weapons is badass. I took inspiration from this picture right here:

For the second hand in we've got a second troops choice and a unit of our choice. I've checked and dedicated transports can be placed into the "own choice" rather than same slot as the unit if we want. So my second hand in will be combat squad 2 with Grav Gun and Combi-Grav and a Drop Pod. I should have those done fairly soon, just need to work out exactly HOW i'm going to paint the pod.

Today i've got some painting done and have some more Iron Hands to show off including my Chapter Master. He's still got a few details left such as the odd purity or piece or rope but he's almost there.

Oh and here is most of a tac squad done too :)

So. My Iron Hands are getting a supplement. Guess November (presumably) will be a good month for me (but not my wallet). Suppose I should pick Wrath of Iron back up and try and guess what i'll be seeing in this supplement.
Posted by Daniel Ryan at 20:07 No comments:

Today my uncle gave me several boxes of old gaming stuff. Hence forth the stuff shall be known as the loot.

Firstly is a box of old High Elves, including 40 blokes with bows, 43 dudes with spears and shields, 14 horses, 3 uber arrow things, a flag, and 12 guys with swords, shields and bows with arrows. I do not play Elves so these guys mean nothing but they look cool.

Next up in The Loot is a tin of Danish Legend Biscuits which expired 30/12/1991. As you can imagine i was a bit worried about opening this one up. Luckily instead of mutated biscuits of doom i got quite a few constipated beaky marines, roughly 30 at a guess and possibly rogue trader ones at that (still need to go through these). Included as well were 5 old metal Eldar and a metal Rapier Laser Destroyer along with a ninja on a hex base. Marines use ninjas right?

Finally and one of the things that really caught my eye was a fleet. This fleet is apparently for "Star Fleet Battles" and is a Star Trek Federation fleet. There are 3 Miranda Classes (USS Reliant was one of these), 6 Constitution Refits (IE Enterprise-A) and 6 unknown but big and funny looking ships. Most of these needed repairs, but they're mostly done. Oh and there was a single Klingon Bird of Prey in there too. Not really an even match up, reverse Kobyashi Maru perhaps?
Posted by Daniel Ryan at 22:08 1 comment:

The First of Many

My first Iron Hands marine is done. The Primarch model so to speak. It's a simple scheme, but not as simple as my Guard. Black spray, Codex Grey drybrush (Mechanicus Standard is the new version i think), details such as eyes and hands done in what ever is required and then Nuln Oil wash with Stirland Mud texture on the base. The picture seems to bring out the drybrushing more than you can actually see on the model. It's simple, it's effective and it doesn't take too long at all. Perfect for ToMG :)

Tale of Many Gamers is BACK!

For those who don't know ToMG is a marketing thing used by the local GW to get people to start up new armies. Each week you add 2 things to the army (usually units, but sometimes back story or objective markers are thrown in too) until you've built up a decent sized army. This year games against other ToMG forces are also being added for bonus points.

The first year i added to my Necrons, last year i repaired and added to my Guard. This year it's Iron Hands from almost scratch (2 combat squads, 2 drop pods and a commander is what i've got so far). I plan on an orbital assault force, so drop pods and storm ravens. The Artisan and The Watcher will be taking part too.

Keep an eye out for updates on all of our armies as the competition continues!
Posted by Daniel Ryan at 20:20 No comments:

This guy, this guy right here, is the start of my Iron Hands. In games he's a Chapter Master with the Shield Eternal, a Thunder Hammer, Artificer Armour along with an Auspex and Digital Weapons if i've got the points spare. He's made using 4 kits. Lord Executioner for the body, Master of the Relics for the back pack, Vanguard Veterans for the Hammer and finally the forge world Character Upgrade Kit for the head. I'll post more pics as i build up the army and when they're painted too.
Posted by Daniel Ryan at 19:21 No comments: